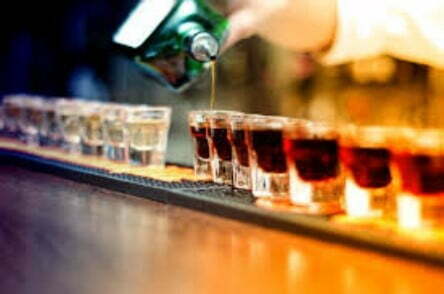 Monir Elias, the 42-year-old founder of Purple Biosciences, carries an outsider’s perspective on the alcohol culture in the United States. Coming from Brazil, he was surprised to see that adult drinkers across California generally do not plan for the negative side effects of a night at the bars, aside from cutting themselves off, and chugging as much water as they can before crashing into bed.

The idea of taking a supplement to alleviate negative side effects of drinking or using a replenishing drink the next day “is out of the public consciousness for most Americans, rather unlike countries in Asia and South America,” Elias says.

Americans trudge through an estimated 2.6 billion hangovers every year, which costs the U.S. $148 billion in lost productivity, according to various studies. Why Americans do not take advantage of hangover helpers on a mass scale is a mystery, but Elias says he believes that once they become aware of his products — with their unique characteristics — “they will begin to,” he says.

Elias’ new company is Purple Biosciences. Its flagship product is branded purple pills called Purple Tree, containing Dihydromyricetin or DHM, which helps alleviate side effects of alcohol consumption. Purple Biosciences brands itself as a company for discerning adults who enjoy drinking, but have to go to work in the morning. Instead of vying for the attention of party-hard frat boys, “we are capturing the attention of health-conscious 30 and 40-somethings who watch what they eat and go to the gym,” he says.

Elias’ insight into the growing market for hangover supplements was shaped by his cultural experiences in Brazil, his engineering expertise, and his strong business acumen. Before founding Purple Biosciences, Elias came to San Diego to earn his Masters of Electrical Engineering and MBA degrees at San Diego State University. His engineering expertise was utilized at ImThera Medical, a healthcare startup company now part of LivaNova. He was ImThera’s third hire, worked there for a decade and helped grow the company from a startup to a $250 million acquisition.

Elias was brought in to ImThera as a Product Director and soon became well known by industry giants for helping the team to develop a new implant designed to replace old-school sleep apnea masks. Like hangovers, sleep apnea affects a huge portion of the population.

“It was surreal going from telecoms to healthcare and then again from healthcare to supplements,” Elias says. “Sure, there are less regulations in the dietary supplements, but at the same time, it becomes about good product development, quality manufacturing and listening to customers on a daily basis. It’s a completely different industry. Every industry I move to, I’ve obviously learned new things, but the essence of business is the same: develop something that works and something that customers love.”

While developing a hangover pill that would win customer loyalty, Elias turned to DHM, an extract from the Japanese Raisin Tree. According to a study, DHM is effective in counteracting the effects of alcohol intoxication, dependence and withdrawal in rats by enhancing the activity of enzymes responsible for metabolizing alcohol.

Elias’s product works by accelerating alcohol breakdown in the body and by replenishing key nutrients lost in the process. The pills also include vitamins to help promote liver health. However, the “difference maker” in Elias’s blend is the patent-pending formula of DHM with Willow Bark, a natural supplement with a chemical structure similar to aspirin. “We included that in Purple Tree as studies show that it acts as a natural anti-inflammatory, which can help with hangovers,” he says.

Alcohol has long been the only recreational drug for which scientists could not articulate a mechanism of action. But researchers have done studies that point to a promising ­theory that hangovers are really an inflammatory response, like what happens when we get an infection. That information was crucial for the development of Purple Tree, which also packs key vitamins that are depleted during alcohol consumption.

“We come to work every day because we want to solve the biggest problems in the thousands of years of alcohol consumption history: hangover and the negative effects of alcohol in our bodies. It is generally agreed in the research community that hangovers are mainly caused by the toxic byproducts of alcohol and dehydration – those are the primary culprits.”

Hangovers hamper health — and productivity worsens with age. Hangovers also cost the economy billions every year. The U.S. experiences more than 2.5 billion hangovers annually. According to the Center for Disease Control and Prevention, excessive drinking costs the U.S. $224 billion every year and 72% of this is due to the loss of workplace productivity.

“Alcohol causes liver damage, skin issues and accelerates the aging process,” Elias says. “Adults, especially women and the elderly, are drinking more alcohol today than at any other time in history. And, for the first time ever, drinking rates among women were equal to those among men in the US. Catering to these different categories  are key to our brand strategy.” 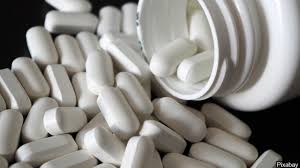 There are competitors to Purple Tree, some featuring DHM, but the presence of natural anti-inflammatory agents in its formula makes it stand out. Elias says the company is working on a clinical study to demonstrate the benefits of Purple Tree. Furthermore, he believes the future of his company lies in selling anti-hangover drinks, a more untapped market niche, which, he says, can become a huge category among functional drinks.

The drinks that Purple Biosciences is developing are based on the same hangover-alleviating supplements that are in the pills, but with a more complete set of vitamins and a unique process to dilute DHM in liquid, which is more efficiently absorbed in the body when compared to the pills. Elias’ goal is to sell the drinks alongside alcohol at supermarkets and liquor stores. 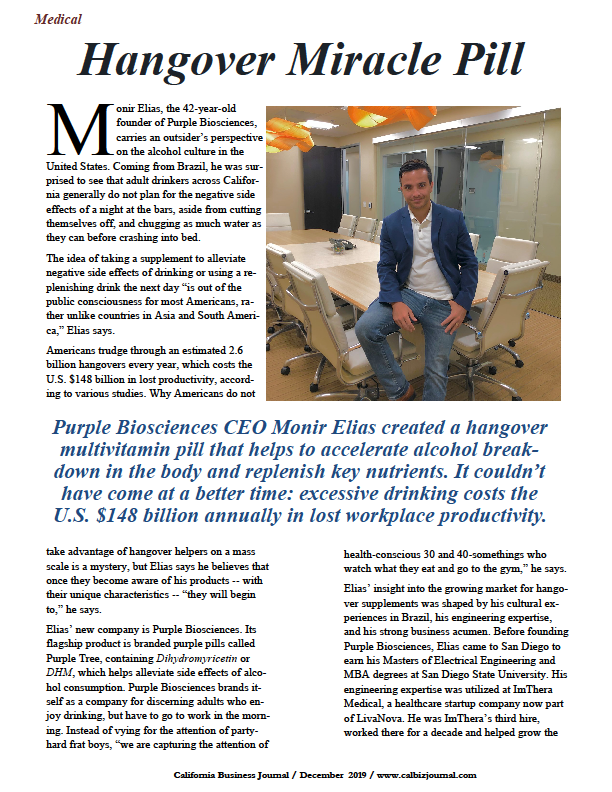 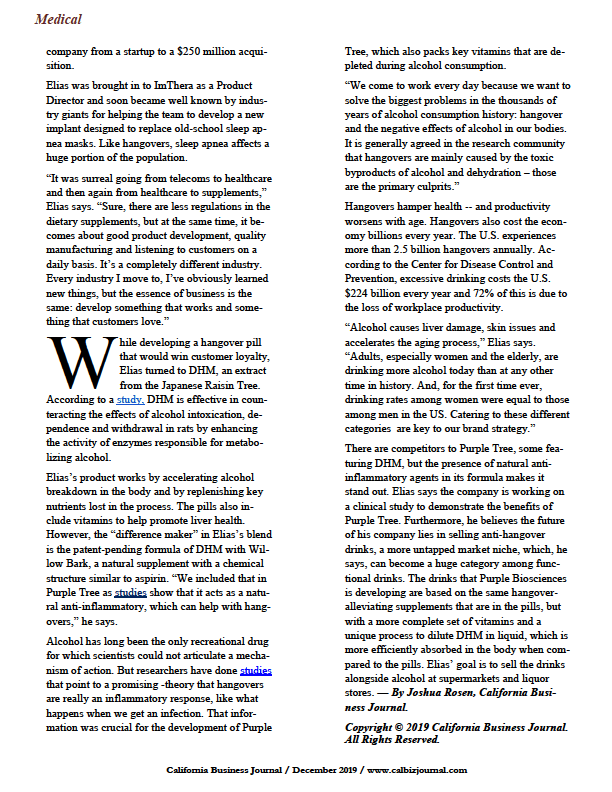 Commentary by Dr. Ryan Shelton: How the Natural Health Industry Has Changed Over the Past Five Years

Best Herbs and Spices for an Office Pantry