Cummins & White Managing Partner Fred Whitaker works his niche as an outside general counsel, playing the ‘long-game’ at the negotiating table. 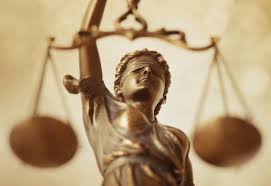 Fred Whitaker enjoys playing chess because skilled players must sacrifice in the short-term to achieve victory.

He sees the classic strategy game as a useful exercise to sharpen his skills for negotiating business deals as an outside general counsel for privately-held companies.

“I think when we’re doing deals we’re playing chess every day,” he says.

As managing partner at Cummins & White, LLP in Newport Beach, Calif., Whitaker  built on the foundation of the firm’s existence since 1951 by developing a lean yet experienced team over the last 18 years to serve family-owned businesses and the individuals behind them. 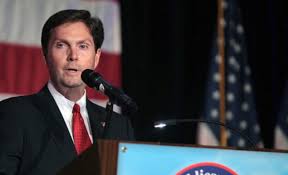 In a way, Whitaker serves as a Swiss Army knife for clients’ legal needs with mergers and acquisitions, commercial real estate, risk management, employment, finance and tax planning. His legal practice is enhanced by his business background as a former vice president, general counsel and division President for SC Fuels, a fuel distribution company based where he resides in Orange, Calif.

“It was like earning a MBA on the job,” he says. “When you’re an inside general counsel and a division President, you really learn what’s important to the shareholders, the people who are funding the company. I think it made me a much better ‘deal’ attorney.”

Whitaker has encountered attorneys who over analyze potential risks to the point that they lose sight of the fact that their clients’ have businesses to run. Holding an executive position at SC Fuels helped him understand what it means to run a business and the underlying need to take the calculated risks necessary to make a return on the company’s investment everyday, he says.

Since his departure from SC Fuels, Whitaker has continued to counsel several privately-held fuel dealers and logistics companies. The industry faces uncertainty as California Governor Jerry Brown and the state legislature push for the use of renewable energy over fossil fuels.

Yet, as Whitaker says, “The industry is going to stay healthy for a long time, because it adapts.”

Notably, some of Whitaker’s clients in the oil industry are pursuing hydrogen and compressed natural gas dispensing at their existing sites.

Despite the demands of leading a firm, Whitaker civic involvement remains an important part of his life. He has held a seat on the Orange City Council since 2010 and also serves as the chairman of the Republican Party of Orange County. He previously served on the Orange Planning Commission, Orange Chamber of Commerce Board of Directors, and the Santiago Canyon College Foundation.

The interest in community service partly stems from his parents’ involvement in community activities and politics while he was growing up in Glendale, Calif. His mother, for example, served on the Glendale Unified School District’s Board of Education.

Whitaker majored in Political Science & History at the University of California, Berkeley because of his interest in tax policy and foreign affairs. During this time, he considered working on Capitol Hill or the State Capitol but watching friends go in and out of political staffer positions dissuaded him from a career in politics.

He instead entered Loyola Law School where he was installed as a member of St. Thomas More Law Honor Society.

“Originally, I thought I wanted to be a district attorney but I had student loans I needed to pay,” he says.

Instead, he started his first stint at Cummins & White, LLP as an associate in 1990. He left three years later to take a job with SC Fuels.

One of the elements Whitaker enjoys as outside general counsel is that he’s not working for nameless, faceless institutions. Often he’s working with a third-generation business owner whose family created the business.

“You’re working with the owner of the business and it’s their baby and their family — it struck a cord with me,” he says.

After working with him for years, many of Whitaker’s clients now see him as a trusted friend.

Matthew McCullough, principal engineer for Monkey Industrial Supply in Irvine, first hired Whitaker in 2000 and has since used him for just about everything – even from getting reimbursement from a vendor who didn’t deliver to his coporate work, and estate and tax planning.

In 2010, Whitaker represented McCullough during the sale of one of his businesses to a publicly traded South Korean conglomerate Hanwha Corporation.

“Cummins & White did such a fantastic job on the transaction that the acquirer ended up hiring them on completely unrelated legal matters,” McCullough says.

That is even more impressive considering Whitaker’s firm faced opposing counsel from Sullivan & Cromwell. There were more people sitting on the other side of the negotiating table for this transaction than McCullough’s company employed.

McCullough has worked with attorneys who will identify risks for the sake of identifying risk that they then bill hours to address, making the speed and efficiency Cummins & White has displayed over the last 18 years quite impressive.

“They have a good sense of business, as well as the risk management, and they deploy that for you,” he says.

For a company the size of Monkey Industrial Supply, hiring an outside general counsel was more economical than paying a full-time attorney, McCullough says.

“We work with big law firms and small firms and we always make sure Fred is involved,” he says. “His participation is invaluable.” 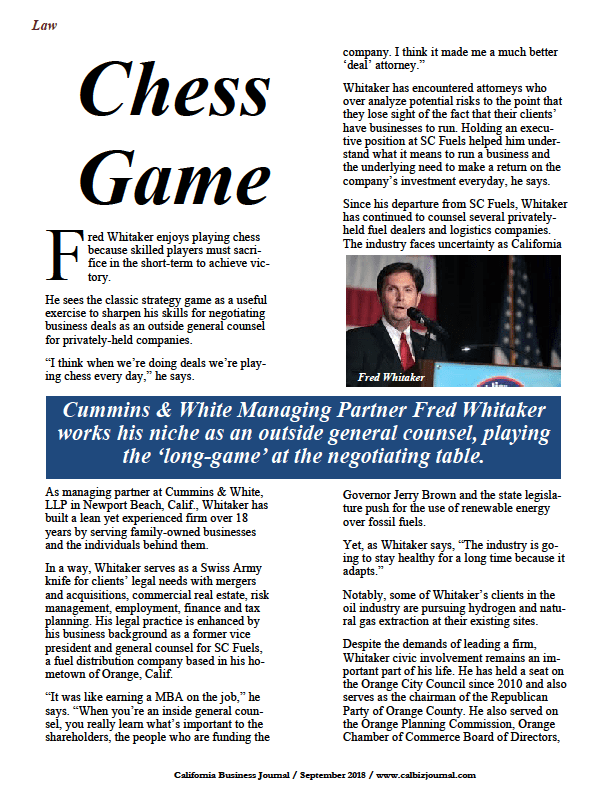 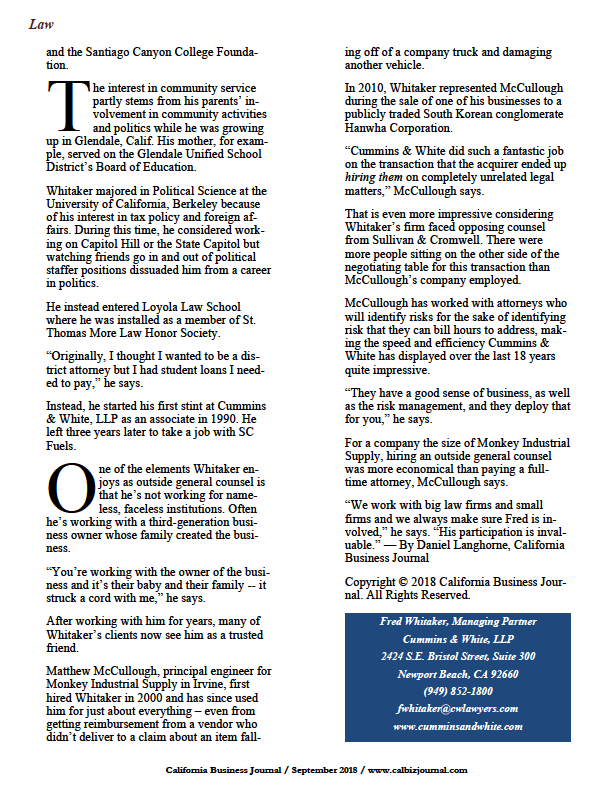