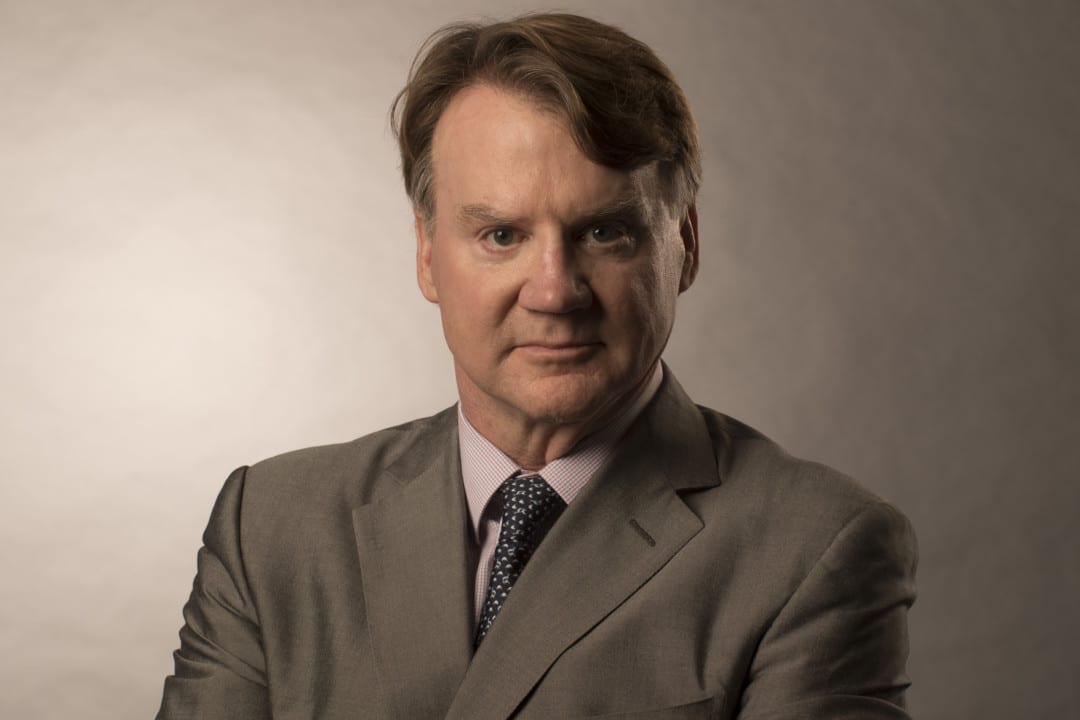 Brian Mulligan’s economics mindset enabled him to become a powerful executive in one of the hardest and most desirable industries on the planet. Now he runs his own investment firm.

If the name Brian Mulligan sounds familiar, it’s because he worked as a top executive at several major Hollywood institutions, including Universal Pictures, Universal Television and FOX, and has been involved in deals that total over $175 billion in music and film, making him one of the most prolific deal executives in the world not only in aggregate but also across all relative verticals.

Whether it’s on a screen, on radio, or even in a theme park, chances are Mulligan has had a hand in it.

He has been a CEO, COO and CFO in virtually every media/entertainment vertical for major media companies, top advisory firms and private equity firms. He was COO of Universal Studios, Co-Chairman of Universal Pictures, CEO of Universal Television, Chairman of FOX Broadcasting and Cable, to name a few.

After running studios and launching Hollywood names into entertainment history, Mulligan decided to go to Deutsche Bank to take its Media and Telecommunications Investment Banking Group to a new level of excellence. As Vice Chairman he took the bank from eighth to first in the Media/Telecom space and from 12th in Media to first in just three years.

Talk about a potential screenplay.

While he hasn’t written his memoirs (yet), he has mixed his Hollywood savoir-faire with a knowledge of numbers and created an investment banking firm of his own, Mulligan Investment Bankers, a broker dealer specializing in Media, Telcom, Entertainment and Tech that he oversees from his offices in Los Angeles and Newport Beach. He also runs Brooknol Advisors for those who seek his consulting services.

While he can’t share the names of his clients for confidentially reasons, suffice it to say that they are well known.

“The value-add is what your bankers can bring,” Mulligan says of investment banking. If they just bring money, he says, it’s not worth the effort and expense.

“I partner with other investment banks to advise, raise cash, do M&A — all the work I did before,” he says.

He brings an understanding of entertainment verticals that others can only dream of. He is expert in domestic and international financings as well as operations of Film, Recorded Music, Music Publishing, TV, Cable, Broadcast, Cable Channels, Video Games, Theme Parks, International Entertainment, Media, DBS, Telcom and properly structuring companies.

“When you’ve been around as long as I have, you know everybody in this industry. I tap into a lot of people. I partner with a lot of people. There’s really nobody I haven’t worked with. People trust me to do the job. They get someone who not only knows the industry, but also someone who understands the economics,” he says.

He pauses for a moment then quickly adds, “I make people better. Whether I’m working above them, below them, sideways, I’m a team player. As I always say, ‘Let the other guy take the headlines, we’ll take the economics.’”

Press releases, he says, are only important for about a day. Dollars make and break everything.

Mulligan was the man behind the Universal and Paramount joint venture purchase of what was then the tiny Sci-Fi Channel for a mere $2 million in 1992.

Their genre of science fiction and space-themed shows fit with a section of their catalog (Star Trek, among them) that didn’t have a home on television or anywhere else. It was a natural fit, and now, he says, the newly-branded SyFy Channel, complete with original programming and a division dedicated to gaming, is worth $8-$10 billion.

“What’s the downside?” he asks of any deal he makes, large or small. Unsurprisingly, this strictly financial point of view was won him praise from investors.

How did he get to this point? Like many success stories, it starts with a childhood tradition, and in his case, it’s a very Hollywood one. Growing up, he would go to the movies every Friday night with his mother. Not just for one film, but for two. The “double feature” may be a thing of the past, but it developed his love and deep appreciation of film.

“I probably saw more movies than any of my peers,” he says of his studio days. That, with his economics mindset, led him to become a powerful executive in one of the hardest and yet, most desirable industries on the planet.

How can you follow in his footsteps? For the Hollywood route, he says to get your education on the West Coast. He attended both the University of Southern California and UCLA (diplomatically, he says he cheers for USC in football, UCLA in basketball).

If a job at a movie studio isn’t right for you, he suggests working at a service company that does business with a Fox, NBC, CBS or ABC. “That way you’ll see what they’re really like,” he says of the major studios.

If you do land a job at a studio, you’re going to start at the bottom, he says, regardless of your background. He advises young people to absorb all that you see and hear — and stay humble. “Be the person who makes life easy for others,” he says. And above all, be kind.

And a prestigious college degree isn’t necessary, he says. “Greatness can come from anywhere,” he quickly adds.

His advice to young investment bankers is to avoid working at a firm right out of school. The hours are merciless, he says, and many get burnt out. Instead, get real world experience in financial or operational sectors, then get an MBA.

“You’ll bring something unique to the table,” he says — and that’s what sets young bankers apart from the rest.

As Mulligan’s firm grows, so does his affinity for Orange County. He says that many Hollywood executives “quietly migrate” down to Orange County. It’s a place to get away from it all while still being able to do business.

He also sees untapped potential. Could Orange County become the next Hollywood? “You’ve got the beach, you’ve got the mountains. You could do westerns,” he says with a smile. Even the skyline of Newport Center in Newport Beach inspires a bit of movie magic. “Look at this! You could make this look like the skyline of…wherever! With a little bit of special effects, that is.” 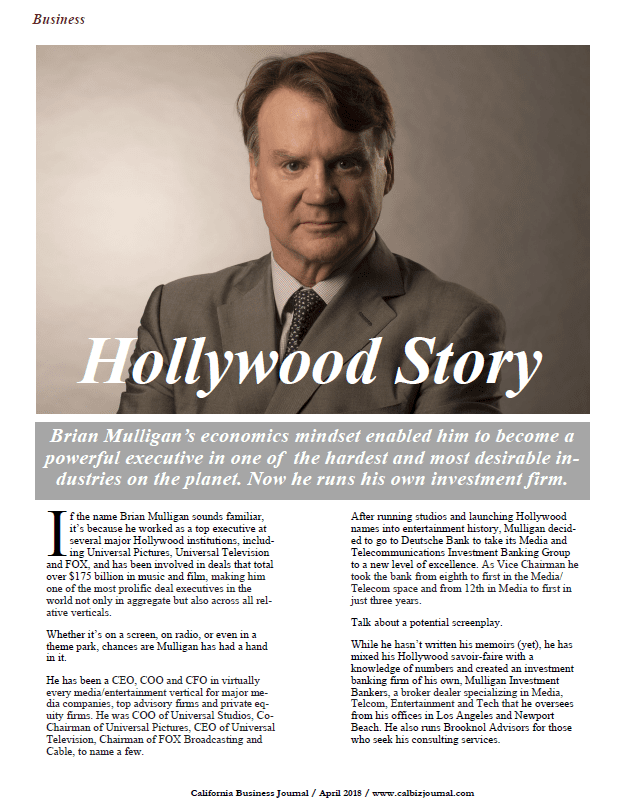 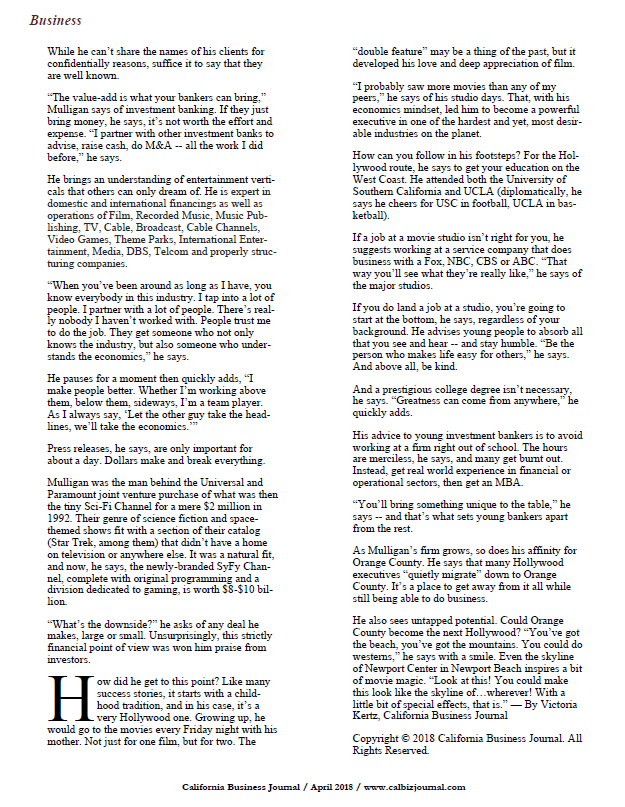