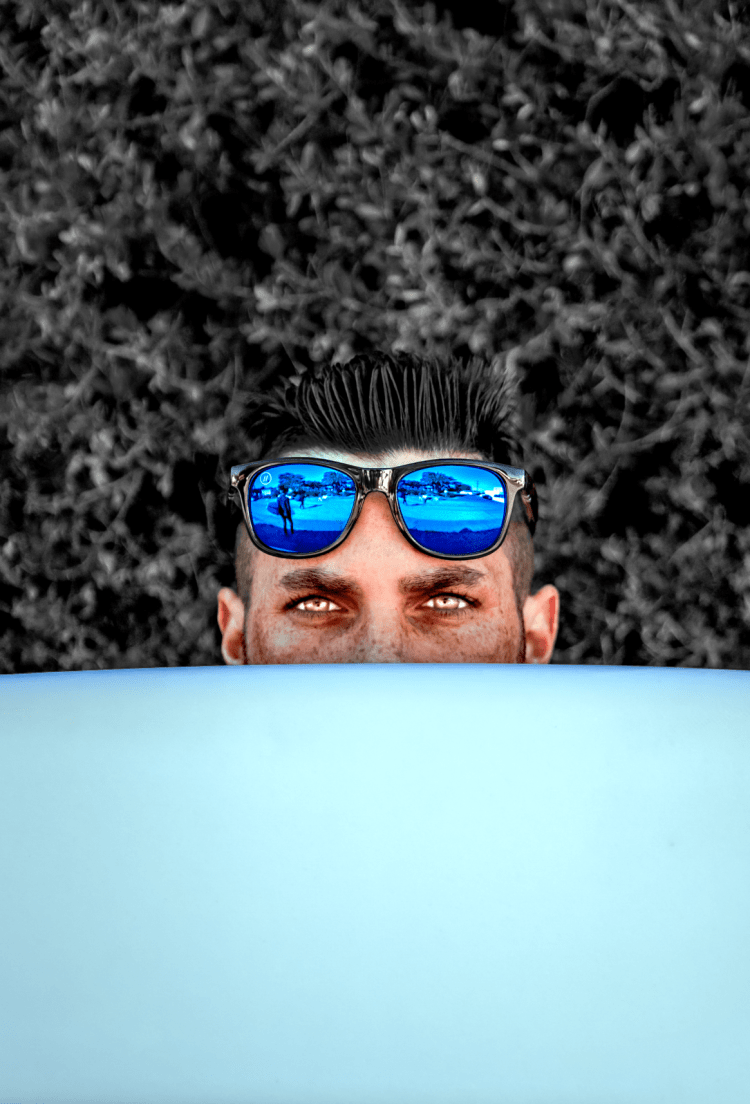 Who doesn’t love a great “belief in a vision and persevere against all challenges” story? Chase Fisher doesn’t just sound like the name of Southern California-based TV character, he has a story to match. This San Diego entrepreneur, who founded his company one year out of college, and named it for the street where he was living ­– Hornblend Street in Pacific Beach.

The name Blenders also does double duty to promote the concept that buyers can mix and match frames and lenses for this sports-action brand that offers sunglasses and ski goggles, in addition to cords, cases and other accessories. Founded in 2012, Fisher got the idea for Blenders when a night out with friends turned into an inspiration, then an obsession.

“I went to a nightclub and wore these neon-green sunglasses I bought at Target for about $5 and everybody started coming up to me to ask about them,” he says. “They thought they were so cool and wanted to try them on. Before long, the evening turned into a full-fledged session on sunglasses.”

That’s where it started. At the time Fisher was working as a surf coach and he began studying trends on the beach and realized there was almost no eyewear available that sat between the $5 Target glasses he had and the trendy, $150 Ray-Bans and Oakleys, so he set out to fill this niche. Before long, he was selling sunglasses from a backpack everywhere he went. Now – eight years later – Blenders is valued at $90 million, according to the press release announcing that Italian eyewear conglomerate Safilo Group had acquired a 70-percent interest in the company.

Fisher retains 30 percent and will remain CEO and “work closely with Safilo Group’s managing directors to enhance production efficiencies and broaden distribution plans.” Padua, Italy-based Safilo owns a large portfolio of internationally renowned designer eyewear brands and, aware of the company’s reputation, Fisher thought it to be an ideal partner.

Perhaps one of the most impressive elements of the Blenders story is that that it has been profitable from almost the very beginning. Other than borrowing $2,000 from his roommate and a small crowdfunding campaign in the early days, the company has supported itself.

“I had no experience, no business plan and really no idea what I was doing,” Fisher says. “I was a rookie just out of college trying to figure out my life. But after the loan from my roommate, I jumped in the saddle. When that money quickly ran out, we did a crowdfunding campaign on Indiegogo to raise another $7,000 and that’s the only funding we’ve ever had so we’ve been bootstrapping from Day One and now we’re selling millions of pairs a year.”

Currently, he has a team of 35 full-time employees in San Diego, who range from creators, photographers and sales associates to those who handle customer service and finance operations. The vast array of styles shoppers can mix, match, and modify is at a $38 – $68 price point.

“We also have a strong network of external resources and agencies we use for marketing, social media and performance marketing, such as email,” he says. “Obviously, we’re not in the office right now but we were able to pivot seamlessly once COVID hit since we were largely digitally based already.”

The company’s manufacturing is done in China and it has what Fisher describes as a “robust supply chain of four different manufacturers that are consistently delivering product on a weekly basis.”

When asked what he hopes people take away from his story, he says, “I always wanted to send a message to the world that even if you’ve struggled in school or felt you were set up for failure, it doesn’t have to stop you from success. I made it work and if I can do it, so can you and now all the ‘A students’ I knew in school, who I thought would be so successful, call me and say, ‘Chase, how did you do it?’”

As we’ve heard so many times before, there is no substitute for hard work, perseverance, and having the humility to learn what you don’t know.

“Bottom line, there’s nothing that can prepare you for this journey; it’s all about figuring it out as you go,” he says. “Mistakes and failure are the best teachers but for me the hardest skill to learn was leadership. The art of delegation is very difficult. I’ve had to learn every role myself and do every role myself and as we grew, it’s something I had a hard time with.”

The other element that was difficult to crack was manufacturing and supply chain.

“I’ve spoken at many entrepreneurial classes in local colleges and that is where the vast majority of would-be entrepreneurs quit,” he says. “I had no idea how difficult it was to make sunglasses and they are like cars in a sense ­– the supply chain is very difficult. Hiring and building a team was also one of my bigger challenges.”

Though the business was built digitally, it has now made the transition to retail with its flagship store, which launched in early 2019.

“This is our first crack at retail and though the market has been rough for big-box stores, it is favoring small, direct-to-consumer brands like ours. We were born online and it’s served us well but there’s only so much emotion you can convey digitally. The authentic brand building is always done in the real world, like when I was selling from my backpack. People can physically interact with the brand – they can feel the quality and fit and see for themselves how the product looks on them.” — Chase Fisher

A second Blenders store is planned for Encinitas once the uncertainty of COVID opens things up again. But in the meantime, the Blenders team did not just sit and wait to see what would happen with the pandemic. It went into action immediately, leveraging its manufacturing force to help.

“When we realized what was happening, we called our manufacturer and produced over 10,000 pairs of safety goggles for local and state hospitals in need,” he says. “And we donated more than $100,000 to DirectRelief.org, a leading foundation behind coronavirus support.”

“The first thing we thought of is how could we be impactful in a way that’s tangible to the Blenders brand and we did what we know how to do: make eyewear that filled a need and move quickly,” he says. “The pandemic has affected us in a lot of ways, but we have been able to adapt, work remote, and haven’t had to furlough or lay off anyone, which was very important to me.”

Having an obsession for your business and product is the one element that will help carry any entrepreneur though the rough spots and inevitable failures, Fisher says.

“I built Blenders around my passions of surfing, snowboarding, traveling and the San Diego lifestyle that gives me so much pride and joy – and now it’s built into our company’s DNA. That has allowed me to endure lot of punches over and over because I know that there’s nothing else in the world I’d rather be doing than this.”

To read the magazine version of the Blenders article,click here.

How Much Payout Can You Expect From Your Personal Injury Case

How Much Payout Can You Expect From Your Personal Injury Case