As William Shapiro raced across the Cal State Fullerton campus, the hot Southern California sun was glaring down on him. Daily running allowed the 21-year-old to keep up his physique, a necessity for the recent college grad with ambitions to become a P.E. teacher once he completed his teaching credential.

For a year he had watched as developers constructed a new building during his run. On this day, as he rounded a corner, overnight, a new sign had been placed on the wall. It now read: “Western State College of Law.”

The vision stopped Shapiro dead in his tracks.

As he panted, trying to catch his breath, his mind raced, and he had an epiphany.  ‘Wow,’ he said to himself. ‘I wonder if I can do that? I wonder if I could be a lawyer?”

This fortuitous moment changed the trajectory of Shapiro’s whole life. Putting aside his ambitions to be a gym teacher, he threw himself into getting into law school. After being accepted, he had to learn a whole new language. In fact, he all but lived with a Black’s Law Dictionary his first year. From these unconventional beginnings, Shapiro developed into a seasoned trial lawyer and litigator who has devoted the last 40 years of his life to obtaining justice for victims of catastrophic injuries and wrongful death. “I’m fortunate, I love what I do even after four decades,” he says. “My infatuation of the law has never left.” 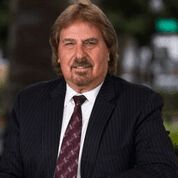 Shapiro, CEO of Shapiro Law, noted key similarities between law and sports, his first love; namely, competition, preparation, and spontaneity, particularly in litigating personal injury and wrongful death lawsuits. He has focused on helping victims who have suffered paralysis, spinal injuries, brain injuries, amputations, burns, and other serious injuries and his results have not only provided financial compensation for our clients, but has often times made for a safer community.

From the outset, Shapiro tried to distinguish himself with preparation, creativity, and attention to detail. “Knowledge of details, looking at things like an MRI and not a two-dimensional X-ray make a difference, and few will out-prepare me,” he says. “Intensity, effort, caring, and commitment — all of these things make a difference. Those that know me know I take my cases and clients personally. I think about my cases 24/7. If I take a vacation, which doesn’t happen often, my staff and family know I’m still thinking about and working on my cases.”

This devotion has led Shapiro to major jury verdicts and settlements for his clients. Just recently, his tenacity and ability provided amazing results to his client who suffered catastrophic brain injuries when broadsided by an uninsured 19-year-old who had run a red-light speeding on a city street after smoking marijuana.

Upon taking the case, Shapiro dug in, researching everything about the intersection and traffic signals. Years of investigation and discovery disclosed the speed of the roadway was far too great, traffic signals were set incorrectly, dangerous conditions that contributed to the collision. Shapiro recovered an eight-figure award from the city that will provide for a better life for his client and local citizens will benefit from the new reduced posted speed limit and updated signal settings.

In another recent case, the wife of Shapiro’s client died when her vehicle struck a permanent cement weir box located about two feet from the roadway’s edge. Upon impact, the car rolled after the tire blew, and she was killed. The public entity denied it was a dangerous condition, but the jury disagreed. In addition to the millions in awarded compensation, weeks after the trial, the entity removed the structure, another demonstration of how trial lawyers make a difference.

Shapiro achieved a similar result after showing a jury the shoulder on the 91 freeway was seven inches not the designed eight inches after a motorist parked on the shoulder opened his door that was impacted by Shapiro’s client’s deceased father. Aside from the seven-figure jury verdict, this led to re-stripping of this portion of freeway.

In addition to the countless verdicts and settlements Shapiro has obtained on behalf of trucking and auto accident victims, another one of his revealing cases demonstrates how horrific tragedy can create lasting safety change. After a four-year-old boy found and played with a utility lighter, he burned down a portion of his family’s house, causing massive burns over 60 percent of his eight-month-old brother’s body.

Without a child safety feature in place, Shapiro sued the lighter manufacturer, alleging defect. After years of litigation, and just weeks before the trial, he obtained a multimillion-dollar settlement for his client. Soon after, the child proof feature was put on each utility lighter of this popular manufacturer.

It’s these types of results that paved the way for Shapiro to be named “Trial Lawyer of the Year,” in Orange County, in San Bernardino/Riverside Counties as well as being named California’s Trial Lawyer of the Year. Humbly, Shapiro admits, “There’s always room for improvement. I also stress to younger lawyers to sharpen their trial skills even if there are fewer jury trials now than in previous decades. It’s the jury trial that is the ultimate neutralizer. No matter how much money a person or company has, no matter how powerful or influential, we leave disputes to be resolved by 12 regular people, neutral jurors who have no dog in the fight. It’s the American courtroom that provides equal justice for all. This is true for injured victims and it is also true for people and companies who are wrongly accused of causing injuries. Everyone has the right to a jury trial and it’s that equality that sets this country apart.”

Shapiro, who teaches trial practice, says, “We’re on the cusp of big changes, including advanced technology in courtrooms and in the office. In the future, more trials will include video footage, making them appear like movies. Likewise, technology will provide greater and faster organization of information. What we’re after is access to justice which is the threshold of what the law is all about.” 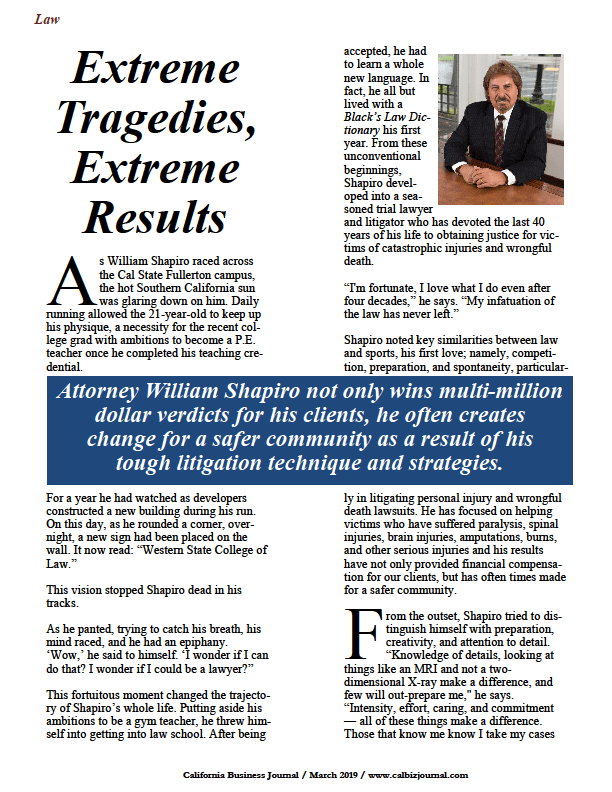 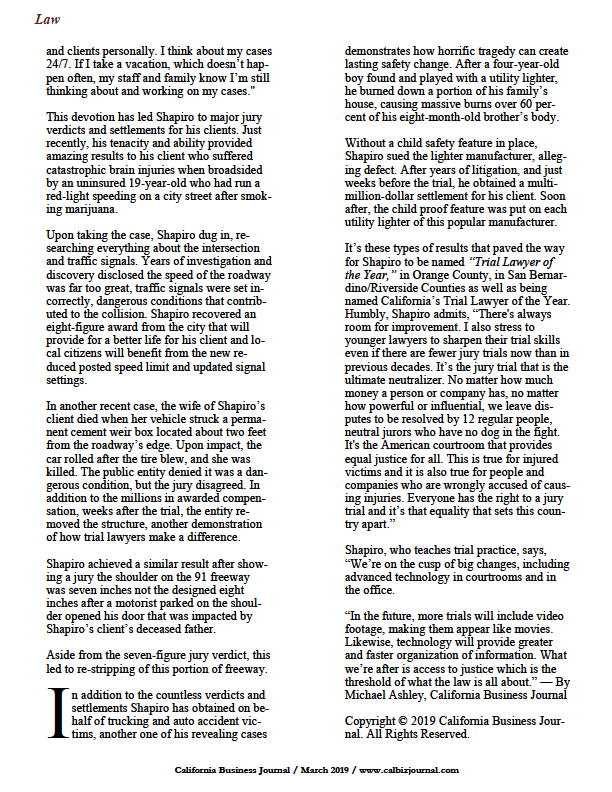