Independent Reviews is an area of law that few attorneys understand, let alone execute. But Nathan B. Hoffman, an experienced award-winning lawyer, has emerged as one of the most notable and knowledgeable attorneys in this specific area of practice in Southern California.

When an elderly person’s children steal from them, potentially leaving them without the financial means to care for themselves, one solution — albeit a tough one — is for that parent to sue their own kin.

That’s the harsh reality attorney Nathan B. Hoffman expertly navigates in the courtroom, where he regularly practices estate and trust litigation. He has made a life and a living through a career devoted to helping clients, especially the elderly.

“It’s incredibly fulfilling if I’m representing an elder who is being taken advantage of and I’m able to help them recover their assets or otherwise protect them,” Hoffman says. “That’s by far and away the most satisfying role I’ve ever played as an attorney.”

A case in point: Hoffman recently represented a wealthy Los Angeles widow in her 80s who — unbeknownst to her — didn’t have enough money to cover a healthcare expense because her three children were pocketing it. Hoffman uncovered the extent of the wrongdoing and recovered much of what she’d lost.

“Her children were stealing from her and doing things that were so despicably ugly it’s incredibly hard to describe,” says Hoffman, who has a private practice based in Calabasas and works in courts at all levels in Los Angeles, Orange and Ventura counties and throughout the state of California.

“It’s never nice, but sometimes you have to sue your own children, which is what we did under the elder financial abuse statute,” he says. “The biggest thing this woman wanted was the return of her art and jewelry; the money was secondary to her.”

It’s that type of case that makes Hoffman feel great about what he does, even if it’s difficult to face the kind of horrific circumstances that some people find themselves in.

The rewarding work he is doing today, however, isn’t what Hoffman ever imagined. In fact, for much of his four decades as an attorney, he focused on business law.

After graduating from Loyola Law School in 1979, he focused his practice in complex business, real estate and construction litigation, eventually co-founding a firm that grew to include more than 40 lawyers.

One of his earliest and most memorable victories was when he represented a paper broker who made a deal with two different companies that didn’t honor that deal. The paper broker was offered $20,000 from the companies, but Hoffman argued his way to a staggering $6 million verdict.

After the longtime success Hoffman enjoyed in business law with  his  former firm, he decided in 1999 to make a change, challenging himself to open his own solo private practice: The Hoffman Law Firm. It was around that time that he became acquainted with an estate planner who needed help with a litigation matter. That experience proved to be the start of his third iteration –   a career in estate and trust litigation and providing Independent Reviews.

Looking back on it now, Hoffman’s transition into estate and trust litigation comes full circle to something he was passionate about as an undergrad student at the University of Southern California, where he was originally interested in going into dentistry.

“I planned to go to dental school, and the name of my major was actually lifespan and aging, which was a biological and psychological view of humans from birth through death; now the science of gerontology.”

He pursued law instead of dentistry, maintaining always, “a sharp interest in understanding people and what makes them tick,” he says. “That requires both an understanding of the biology and psychology of who we are.”

Since moving into estate and trust litigation 15 years ago, much of what Hoffman learned in college about people in the different stages of their lives has been instrumental in helping him understand — and serve — clients of any age.

Letting people talk is crucial to understanding each case. For instance, Hoffman handled a suit between two sisters — one biological and one adopted — that was less about money and more about a lifelong fight the two women had been having over the love of their mother. Knowing that fact changed the way he sensitively represented his client and helped move the matter to resolution.

“I am energized by the complexity of estate and trust issues that are unique in almost every case,” says the 65-year-old husband, father of three and grandfather of two. “That challenge is why I like getting up in the morning and still working. You’ve got to like doing it otherwise you won’t like driving all the way to the L.A. courthouse to be there at 8:30 in the morning. I not only enjoy it — I look forward to it.”

Today, the primary focus of Hoffman’s practice is representing beneficiaries or trustees of all ages. He also offers mediation and Independent Reviews (“IR”). Although Independent Reviews make up only about 10 percent of his business, it’s a growing portion that “few people understand well enough.” Hoffman, meanwhile, has become a champion for educating the public and professionals about the importance of independent reviews.

“Outside of estate and trust lawyers, I don’t think anyone knows about IRs at all,” he says, noting that IRs have been around for only about a decade now. “I speak on this topic now — and other lawyers have written articles — so it is becoming more well-known.”

A Certificate of Independent Review (“COIR”) provides clients with an independent, impartial and confidential assessment for people preparing or amending their estate plans.  It can be both statutory and non-statutory.  The review and the certificate can provide a significant protection to assure the plan, as intended, is followed and it can definitely limit litigation related to those matters.

“Contrary to what people think, lawyers don’t know everything about the law. Even lawyers who practice estate planning don’t know everything about their own area of the law. IRs were not high on lawyer’s lists of things to learn when they first came out,” he says, noting that professionals have been taking more interest lately since a lawyer was accused of malpractice for not recommending an IR to a client.

Every year, the number of IRs Hoffman is handling is more than tripling, turning him into one of the most notable practitioners in this area in Southern California. He envisions it ultimately replacing his litigation work as he ages.

“The significance of it is critical: I tell clients an IR is like an insurance policy for your estate plan,” he says. “If there is evidence taken at the time that you are creating your plan that this is your intent and you are not being coerced or unduly influenced into making these decisions, that is significant. That is what the court should follow.”

More IRs being done in the estate planning process could help reduce costly litigation down the line and ensure that a person’s estate is distributed the way they wish.

Hoffman is honored to be trusted to help any client through what can often be a painful and emotionally-charged experience, whether a few thousand dollars or a few million dollars are on the line. He even volunteers his time to those who cannot afford his services, offering trained mediation services pro bono a couple times a month through the San Fernando Valley Bar Association and the Los Angeles Superior Court and to assist the parties to find a way to resolve their disputes, end the litigation and save money at the same time.

Hoffman’s four decades of work in the court of law haven’t gone unnoticed. He is an award-winning attorney who boasts accolades such as a 5 out of 5 – AV Rating of professional excellence from Martindale – Hubble not to mention being awarded as a “Super Lawyer.”

Hoffman’s role as an attorney is about knowing, as he says, “how to argue, when to argue and when not to argue to provide the client with the best opportunity to prevail.” 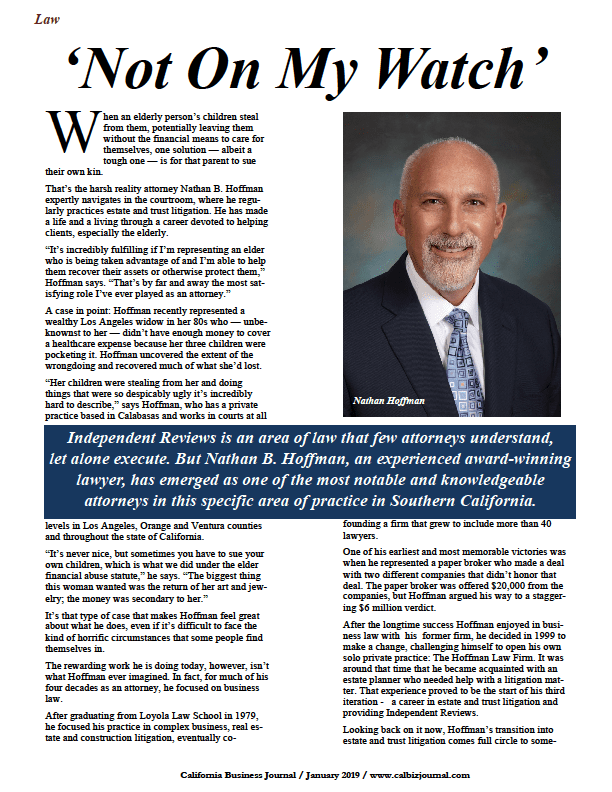 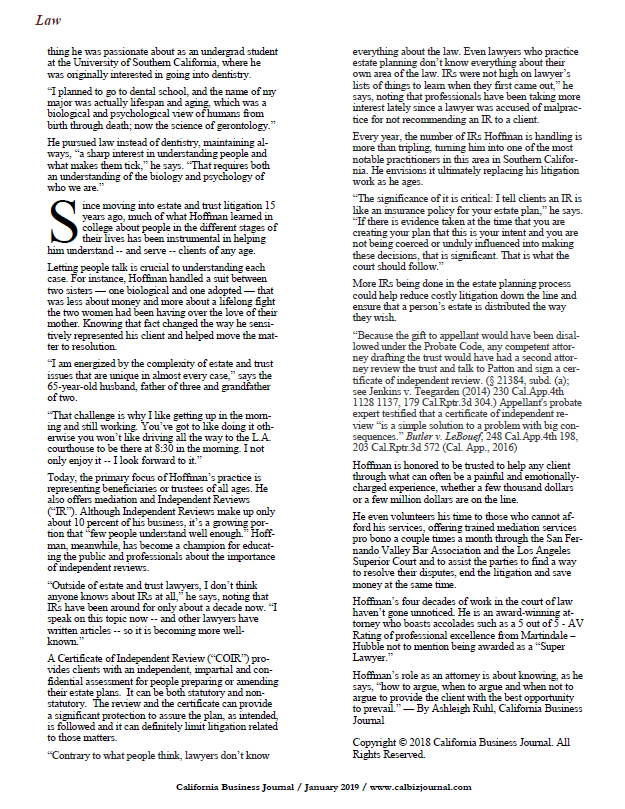 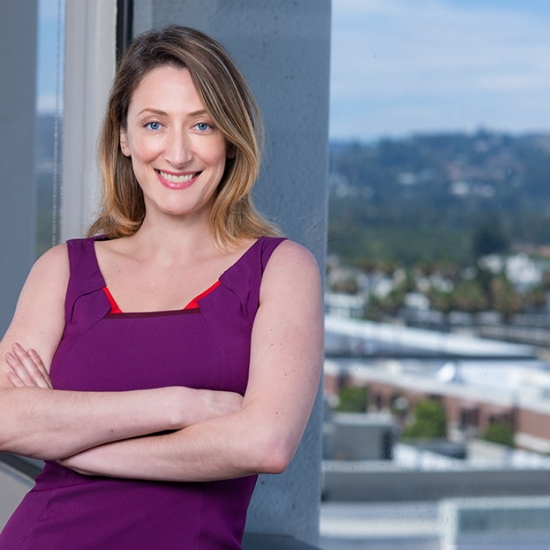